Writing a book: how to work on many projects

After quite a bit of pondering, writing and editing, I shipped the Learning as a Software Developer book last week. The whole process took about 6 months to complete, so I had time to experiment with a few ways to work. During that time, it was important for me to keep the blog going and still have time for technical learning and my various homestead-y hobbies. So, in that case, I was in for a marathon, not a sprint.

Spoiler: making a commitment to write regularly was the best way to make progress.

I’ve also tried a batching approach to the problem. The idea was to write a few blog posts in advance the first week, then spend the next week working on the book, and finally do a bit of technical learning. It was working decently at first and I WAS able to batch a few posts in advance, but then life happened and I was only able to write a little bit for the book before having to go back to blog posts. Fail!

Making sure I’d work a bit on everything each week was the best way to make sure I’d keep moving forward. It kept everything fresh in my mind, so I had less catching up to do to go back into the flow and start writing. To limit context switches, I’d pick ONE thing to work on every night instead of jumping from task to task. 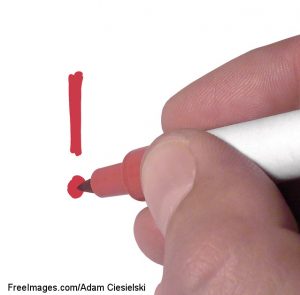 I’m aware this makes me less effective than batching, and that it takes more time to complete some projects, but this way I don’t lose steam and burn out. Right now, I’m living in manager space and not in maker space: I don’t have time to focus intensely on a project for hours every day, so I have to sprinkle important projects here and there to make sure they get done. If I space out working on each project too much, I’ll wake up 6 months later without having published a new blog post or written a newsletter.

Relating to this, I also had to hone my ability to get to work immediately (or at least faster) since I’m working during the gaps in my day. I only have a block of a few uninterrupted hours in the weekend if I’m lucky, so I can’t lose 2 hours getting started every time.

The key here is to have a task primed and ready to go, or at least a well-defined process. For example, to write a blog post, I generally write a draft in one go, and then edit the next time, so I’m either starting a new blog post or completing one.

Finally, what helped me is that all those tasks are similar enough to fall into the same habit. I changed my blogging habit to a habit of writing and coding using the same cues and rewards, so I’ve not lost a habit that took some work to build. It took quite a while to ship everything this way, but in the end it was worthwhile and allowed me to ship the first version of the book to you.

The joy of batching 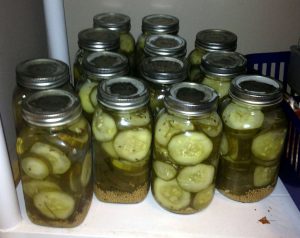 The garden is winding down, so I need to can, freeze and otherwise preserve the harvest so it doesn’t go to waste. It’s a time-consuming task: a single batch of pickles takes a few hours, from slicing the cucumbers to processing the jars. Still, it’s a decent time investment since I like homemade pickles. It would not make sense to cook a jar each time I needed more instead of batching it all together once a year.

Batching is a great boost to productivity, be it to create software or to cook. You want to keep thinking about what you’re doing so you avoid cooking each proverbial jar of pickle separately. Does your day look like this?

It’s hard to avoid this completely when emergencies are rolling in and email and chats are clamoring for your attention. Still, you’ll lose a lot of time working like this even if you feel you’ve been productive all day. Having to switch gears to handle a task takes a bit of time for each, so it’s worth thinking about it.

When all the tools are in place and you’re in the thick of it, writing another validation, answering that last email or completing a feature properly doesn’t take much more of your time. What is expensive is getting started and finding everything you need to do your job. You should always keep in mind how you could group similar tasks together to minimize setup time instead of choosing tasks at random.

Batching can’t be applied to everything: you can’t make sandwiches for the whole year in a single weekend, or stay up to date with new technology by binge learning for a week and then quit learning for the rest of the year. The best way to use it is to complete well-defined tasks that you’ve mastered. If you’re likely to be side-tracked, for example by writing a huge, complicated email while you’re trying to clear your inbox, it may be best to finish that one later instead of breaking your momentum.

My most productive time is in the morning, which is when I can have a few hours to go though my backlog and kill many small, similar tasks without interruptions. I’m sure you have one of those periods too: you should protect it as much as you can because that’s when most of the work gets done.

Getting over myself and doing things the easy way

During the summer, I usually spend a lot less time working on the computer. I’m outside instead, taking advantage of the short Canadian summer to garden and soak up sun while it lasts. When I do work on something, I keep it light and try new technology that piqued my curiosity just for the fun of it. 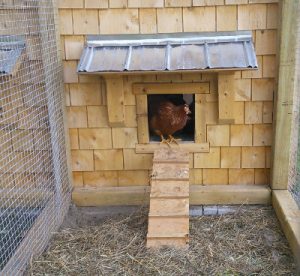 This year, we also started keeping chickens, so my new project is to automate our chicken coop. The goal of this system is to automate the lights, and act as a weather station to collect information about the conditions inside and outside the coop. All of this will be controlled by a web application accessible from a smartphone. Ultimately, I’d like to automate the doors too, but it’ll require a bit more work.

It’s a fun project that allows me to dust up my neglected hardware skills. It’s been a few years since I’ve seriously worked with hardware: when I was last involved with microcontrollers and embedded computers, Arduinos were just starting to get popular. Since it’s been so long, it’s been interesting to see how my thinking has evolved.

I have been a professional programmer all my working life, but I’ve studied electrical engineering AND programming. One could believe that all that theory from school would be useful, but it used to slow me down a lot: every time I would start a new project, I would first try to plan out how everything would go.

I would then start worrying about all the potential problems that could come up, get sucked down the rabbit hole and eventually quit working on it. If I didn’t knew much about electronics, I could have hacked things together until they worked and be satisfied, but I had the curse of knowing just a little bit too much.

Also, since I did spend a few years studying this, I felt an obligation to follow the “one true way” and make my own life as hard as possible. Why use Arduino and existing libraries when avr-gcc works just fine? Libraries are for wimps! If you’re not pouring over 100+ pages of datasheets, you’re not doing real electronics!

All of this is completely ridiculous of course, especially if it’s a project you’re doing for fun. I’m thankful there are standards and good practices for commercial products: I don’t want my oven to set the house on fire or interfere with my smartphone. But if you’re just looking to learn and experiment, you can’t do much damage with a 5V circuit. Maybe you’ll burn a few components, but that’s life.

Looking back, I see a lot of similarities with how people are told to learn to program or to start using a new language, cramming in too many computer science patterns and practices before getting started. Trying to learn theory without balancing it with practical work on real software is a dangerous pitfall that will stop you from progressing. If you have too many things to keep in mind at once, you’ll start worrying about how your project will collapse under its own weight because of your spaghetti code, even if you’ve barely gotten started.

In the end, you’ll stop yourself from shipping projects even if you don’t have any users yet. You’ll start believing that you must understand everything to perfection before getting started, and that no shortcuts are allowed, ever. That makes it really hard to keep learning and growing.

As a programmer, you’ll learn where you can cut and where you must put more effort with experience. This can’t be learned from books and courses, you have to see it for yourself. There is a time and place for implementing things yourself because you wish to learn more or because it’s a critical part of your project, and another for using code someone else has written and that is good enough.

Thankfully, I’ve gotten over myself and I’m now more laid back about using hardware and code other people made. For this project, I’ve been using some great open source code from the Arduino community instead of trying to reinvent the wheel, and it’s been a blast. Hopefully, I’ll bring this one to the point where I can use it!